My camera is running overtime with these clear skies for more than a week in a row now. There’s still a lot to be processed, but that’s for keeping me busy during the rainy days.

M51 (NGC 5194)  is a grand design spiral galaxy located in the constellation of Canes Venatici, “the Hunting Dogs”. It is one of the most famous galaxies in the sky, appearing face-on when viewed from Earth and was one of Messier’s original discoveries. He found it in 1773 while observing a comet. The obvious spiral shape of this object is what gave it the name, Whirlpool. It was the first spiral galaxy to be discovered. Careful observation reveals that this object is actually two galaxies. The second, known as NGC 5195, is interacting with M51. The outer regions of the two galaxies actually touch each other. M51 is located about 37 million light-years from Earth 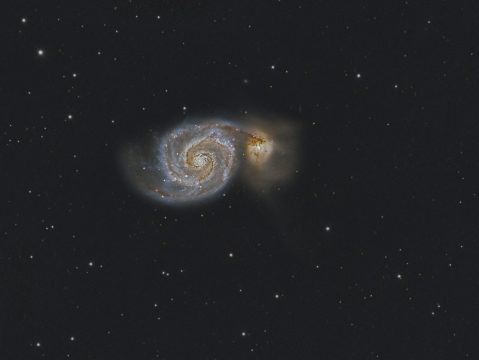