The Helix Nebula (NGC 7293) is a large planetary nebula located approximately 700 light years from Earth in the Aquarius constellation. It is the nearest bright nebula to our solar system. The nebula’s striking appearance earned it the nickname “The Eye of God”, as well as “The Eye of Sauron”. The Helix Nebula was created at the end of the life of a star similar to our Sun, when the star evolved into a red giant and shed its outer layers. The star’s outer gasses, expelled into space, are lit by the remnant central core of the star, which will become a white dwarf when it cools down. The apparently smooth ring is actually made of a myriad of dense “comet-like” filaments that point away from the central star. These filaments, consist of dense, dust-filled neutral knots ionized around the outside by the central star’s intense ultraviolet radiation, the ionized gas then streaming away from the star. Similar structures are seen in the more-distant Dumbbell Nebula (NGC 6853). Though the Helix appears to be made of a pair of interlocking rings, it is really more of a barrel-shaped object, wherein we look down the barrel’s mouth. 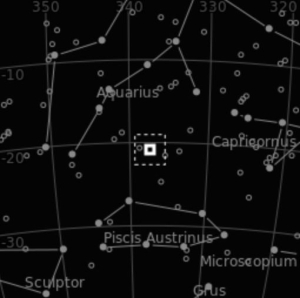