Last weekend had two nights with relatively clear skies, mainly from midnight to early morning. So I decided to image a beautiful Messier object which was close to zenith. M101, aka the Pinwheel galaxy, was a good candidate. A beautiful spiral which I imaged a few years ago but with poor result. This object is really hard to process! However I’m pleased with this picture which shows nice details and even a hint of the very faint outer spiral arms. I also took some additional frames in H-alpha which accentuate the zones with red interstellar hydrogen gas, which then triggers strong star formation activity. In total I spent capturing photons for more than 12 hours.

The Pinwheel Galaxy (also known as Messier 101, M101 or NGC 5457) is a face-on spiral galaxy distanced 21 million light-years  away in the constellation Ursa Major, first discovered in 1781. M101 is a relatively large galaxy compared to the Milky Way. With a diameter of 170,000 light-years it is seventy percent larger than the Milky Way. It has a disk mass on the order of 100 billion solar masses, along with a small bulge of about 3 billion solar masses. 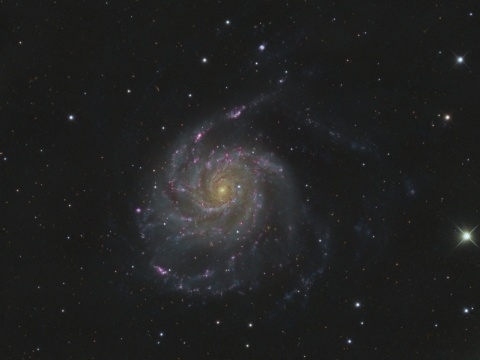